We live, work, and shop in Crown Heights West. We need more public trash bins and they need to be emptied more often so the trash does not overflow on to our sidewalks and streets.

The petition will be part of a package that we are sending to Council Member Tish James. We will also ask for her help in solving our trash problem.

More ways you can help us tackle the trash problem.

Join us for a day of service on Martin Luther King, Jr. Day, Monday, January 21. We’ll meet as a group and do a cleanup of Franklin Ave., picking up and disposing of litter on the street.

Monday, January 21, 10AM
Meet in front of HAD Associates
737 Franklin Ave.

IT’S TIME TO SPRUCE UP OUR PLANTER BOXES ON FRANKLIN AVENUE
AND WE NEED YOUR HELP
Please join us on May 5th, if we have enough people we will do a Franklin Avenue clean up as well
AND
HELP US GET THE WORD OUT
Please print this flyer and post it in your building/laundromat/coffee house/etc.

Residents who normally receive Monday garbage collection should place their trash out at curbside Monday after 4 PM for pickup. While many residents will receive refuse service within a day or two after the holiday, some residents may not be picked up until the next scheduled collection day. Those receiving Monday recycling collection will have their recycling picked up on Tuesday, February 21st because they didn’t receive a recycling collection on the Lincoln’s Day holiday.

ALL MONDAY RECYCLING COLLECTION TO BE PICKED UP ON TUESDAY, FEBRUARY 21ST

The New York City Department of Sanitation (DSNY) reminds all New Yorkers that residents who would normally have received recycling collection on Lincoln’s Birthday, Monday, February 13th, will have all of their recycling picked up on Tuesday, February 21st, due to the observance of Presidents Day on Monday, February 20th.   For questions about Sanitation services and holiday schedules, residents can contact 311 or visit the DSNY website at www.nyc.gov/sanitation.

JOIN US FOR A PLANTER PARTY
THURSDAY JUNE 30TH,
5 PM UNTIL DARK
AT THE CROW HILL COMMUNITY GARDEN
(FRANKLIN BETWEEN PARK & STERLING PLACE) Please join us Thursday,
Bring gloves, a spade, plants/flowes, kids, your neighbors
or just yourself
and help us make Franklin Avenue bloom this summer!!!

We had a great day building 20 new planter boxes for Franklin Avenue
CHCA would like to give a big thanks to:

Mike Perry for his amazing logo and the wood brand!!!

Mike & LaunchPad for the space to build and store the planters

and to all those who glues, nailed, screwed measured & marked, branded, carried and give their time to this great effort

You can still be a part of this project: we need soil and plants…
Any ideas….

We are so proud to announce that Crow Hill Community Association was given the 2011 Daffodil Award for Brooklyn by New Yorkers for Parks. Chair Stacey Sheffey was honored at their annual Daffodil Project Benefit Breakfast For the past 3 years, Stacey and the Go Green/Go Clean committee have been planting the daffodil bulbs in the tree pits and planters along Franklin Avenue. The bulbs are donated through New Yorkers for Parks as a living memorial to 9/11. We look forward to continuing the project for our 4th year this fall when we will have 20 new planter boxes on Franklin Avenue. 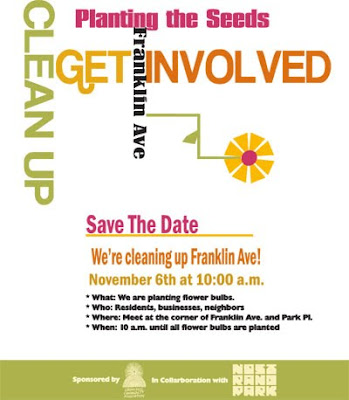 Please bring your leaves to the Crow Hill Community Garden to be used for composting & mulch. If possible, please use paper leaf bags (available at Home Depot) We will have composting information available at the garden during the drop off times. The city no longer collects leaves for composting, if you put them out in your trash, they end up in landfill.

CHCA meets on the third Tuesday of every month at 7:30 PM
Except July & August.

If you've recently filed a complaint with 311, email us at chca@crowhillcommunity.org with your reference # and the subject of your complaint. There's more power in numbers!